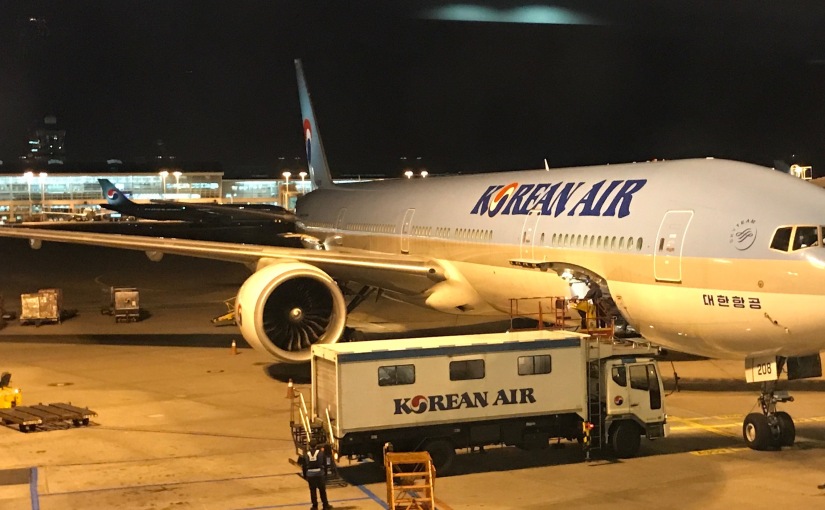 Unlike a lot of airlines these days, Korean Air offers great business and first class award availability at reasonable redemption rates. Further, the airline’s updated website makes award booking – a process that used to be incredibly arduous – easy. Coming back to Singapore after the holiday’s, I decided to take advantage of the generous award availability on Korean Air and book myself in business class. The trip included a very long flight from Washington DC to Seoul and then a shorter, but still irritatingly long flight from Seoul to Singapore.

I booked my one way business class ticket from Washington DC to Singapore using just 75,000 Miles + $34. I had about 40,000 SkyPass miles in my Korean Air account from prior flights on the airline, and I was able to transfer the remaining 35,000 miles instantly from my Chase Ultimate Rewards account. This is one of the best Chase partners and one of the reasons the Chase Sapphire Reserve credit card is so valuable.

I consider 75,000 miles to be an incredible bargain, especially when paid tickets in regular economy on this flight can cost upwards of $1,000. Meanwhile, my exact ticket was selling for over $4,000. This was my itinerary:

The layout for the old business class product is in a 2-3-2 setup as shown here:

It’s worth noting that the difference between the two business class products is fairly substantial. The new suites feel more spacious and more comfortable then the old ones, and if you book the window seat, far more private.

The flight was delayed about an hour as the incoming flight from Korea was late. Once boarding began, the process was fairly efficient. The business class section was only about a third full. As mentioned above, I had selected window seat 11J.

The new business class product has staggered window and aisle seats. This makes the window seat even more private – it kind of feels like a mini suite. These seats are great for solo travelers. Also, there is a separate walkway to the aisle for each window seat, that way you don’t have to deal with your neighbor when getting up to use the restroom. A remote controlled partition can also be raised after takeoff for additional privacy. You can see how the seats work a bit better from this Korean Air website picture:

For comparison purposes, here are the old business class seats – which were on my second flight from Seoul to Singapore:

An electronic control to the left of the seat made it easy to quickly convert the seat into a bed without having to get up – something I appreciate.

The entertainment monitor was large and placed directly in front of the seat. It was operated by a touch screen remote.

The seat had lots of leg room and a ledge to rest your feet on.

The seat also included lots of storage space and a large arm rest to store glasses on.

The seat also included a multi-purpose outlet and a separate USB port.

Once boarding was complete, the flight attendants stopped by to welcome each business class passenger onboard. Amenity kits were passed out and kids received a separate gift. The amenity kits included some nice items including a good quality eye mask, toothbrush, lip balm and face cream. For what it’s worth, the products were from Davi. There was also a hair brush and a shoe horn. Hooray!

Apparently the 2018 winter olympics will be held in Korea, as the branding was everywhere and each movie / TV show opened with an advertisement for the games. You can see the Olympics branding on the bottom right of the amenity kit bag.

Waiting at the seat upon boarding was a large blanket in plastic wrap, disposable slippers, and an incredibly small pillow. I appreciate the warm blanket but the small pillow made it difficult to sleep. I ended up taking a few pillows from some of the empty business class seats around me.

We pushed back from the gate around 1:00pm, a little over an hour late. We had a long-takeoff roll and then the seat belt sign was turned off only a few minutes later. It was a cloudless day in Virginia and there were some good views of the cold ground below as we ascended.

Shortly after takeoff, an announcement was made in Korean and then an American voice came on the intercom. He said he was the pilot and welcomed us onboard. He informed us of our flight time to Korea at 14 hours and 11 minutes. The second leg of my trip – Seoul to Singapore – included a British pilot as well. I wonder how that works in the cockpit language wise – do they all speak English during the flight, or does everyone speak Korean?

The entertainment options on the flight were the biggest disappointment of the trip. There were about 33 Hollywood “hit” movies and a few “classic” movies. There were a lot of movies I hadn’t heard of before and only a few that seemed worth watching. The classic movies included such timeless fare as Moulin Rouge and Back to the Future. The TV options were even more sparse, a few American sitcoms – Friends and the Big Bang Theory – with only two episodes each.

Even more surprisingly, there were only 3 Korean-language movies.

I ended up watching every TV comedy option available – which only took about an hour and a half. After that I watched a few movies, the best of which was The Big Sick and the worst was the clunker Home Again – a painfully slow movie with no chemistry between the lively Reese Witherspoon and her not-at-all believable love interest.

Great entertainment options can make a long flight pass much faster. Unfortunately, I found the entertainment options on Korean Air to be extremely wanting, especially for business class on a 14-plus hour flight. Is it too much to ask for a few full seasons of popular TV shows à la Netflix? This seems to be standard practice on United long haul flights now, even in economy. It’s never a good thing when United Airlines makes you look bad.

The one other thing that bothered me about the entertainment was the arbitrary censorship of certain movies. For example, the Big Sick was edited for content and all swear words – including the word goddamn – were beeped. Apparently the general public can’t handle that kind of salty language. Who knows what other content was removed from the movie as well.

Shortly after takeoff, a flight attendant came by to take each passenger’s lunch and dinner order. I was informed that dinner would be served 30 minutes before landing in Seoul, which seemed to be cutting it really close – but it actually ended up being 3 hours before landing. I ordered a glass of champagne and Bibimbap for lunch. For dinner I ordered the beef bulgogi. The menus read as follows:

The lunch started with a small seared scallop in sauce.

Then a bit of duck and salad.

After that the main course was served.

I wasn’t a huge fan of the cold Bibimbap but that’s probably more of a personal taste thing.

For dinner I had the beef bulgogi which I normally really like. Unfortunately, I found the bulgogi on this flight to be really chewy, drenched in sauce, and not all that flavorful. The rice was also a bit mushy and oddly unappetizing. I didn’t eat much of either.

I skipped out on the dessert and the cheese tray which was wheeled around on a cart after lunch. I had some of the seasonal fresh fruit which was definitely not in-season or fresh.

Overall the service was good but the food left something to be desired.

For about 13 hours of the 14 hour flight we hit almost no turbulence. I can’t remember ever being on such a smooth flight for that length of time. Unfortunately the last hour was a bit bumpy, but nothing too crazy.

Despite being in a fully flat bed, I did not sleep particularly well on the flight. As is common on larger airplanes, it was not possible to control your surrounding temperature as there were no air vents above the seat. I went from freezing cold to burning hot and then back again during the course of the flight. Although the blanket was large and warm, the pillows were insubstantial and not very comfortable.

The entertainment options also included a standard flight tracker and two outside cameras that could be monitored during the trip. I ended up watching the landing at Incheon via the front camera.

There were also some nice views out the window as we approached Seoul. 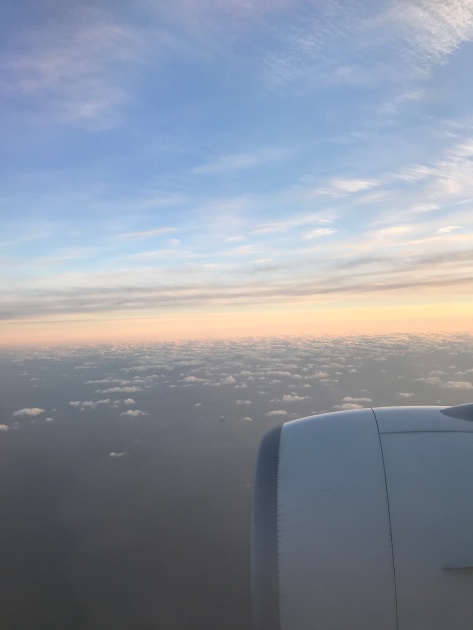 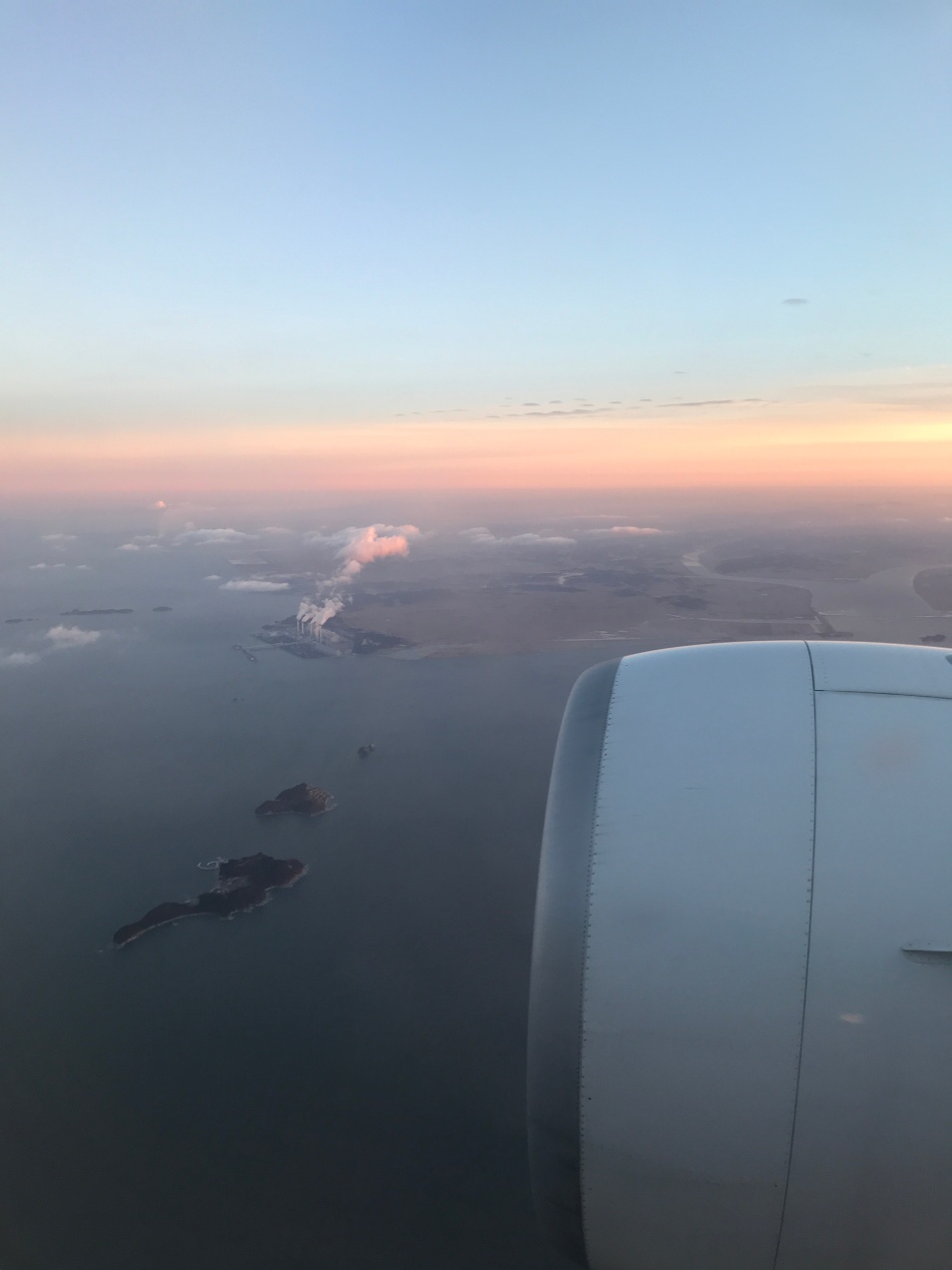 Our flight route took us almost directly over the North Pole, then down through Russia and China and then around North Korea.

Here is the flight time and path from FlightAware:

As you can see, the flight ended up being just 18 minutes shy of 15 hours.

One last point to note, Incheon Airport is not a good place to transit if you have a short layover before your next flight. The security line – which all transiting passengers are required to go through – is a huge mess with passengers from all incoming flights ushered into one of two lines.

I’ve waited in one of these lines for almost an hour before. The line when I arrived this time was even longer. Fortunately, as my flight to Singapore was supposed to be leaving in only a few minutes, I was permitted, with some pleading, to skip most of the security line. In my experience the airports in Japan and Hong Kong are much better at handling transiting passengers as they have more security checkpoints.

I found my business class seat to be reasonably comfortable with lots of room and privacy, and in my opinion that’s the most important criteria for judging a business class product. Further, for a mere 75,000 miles and $34, this itinerary was a veritable steal.