Jetstar Airways is a Qantas owned low-cost carrier that operates in Australia and New Zealand. The Jetstar Group also includes Jetstar Asia Airways, based in Singapore; Jetstar Pacific Airways, based in Vietnam; and Jetstar Japan. Qantas owns only a minority interest in each of these Asia based carriers.

Jetstar Asia, the Singapore based entity, flies to 22 destinations in North and Southeast Asia with a fleet of 18 Airbus A320 aircraft. Since relocating to Singapore in 2014, I’ve flown on a number of these routes.

At the end of August, we travelled to Vietnam for a long weekend and to get there, we flew Jetstar Asia from Singapore to Da Nang. Below is a review of our flight and some general observations on Jetstar Asia

Like its US counterparts, Jetstar is a low-cost carrier that charges extra for everything from picking your own seat to checking luggage. Even water and light snacks cost extra. However, I find the rules and fees to be a bit less draconian than those on similar airlines in the US.

For example, Jetstar Asia allows carry-on baggage of 7kg (15 lbs) per passenger for free, without the limiting size restrictions that are all too common on US airlines.

When booking on Jetstar, you can choose from a number of “bundles” that offer increased carry-on weight allowances, checked baggage allowances, and pre-paid meal options. There are also bundles that allow you to earn Qantas loyalty points for your Jetstar flight. The bundle prices below were per flight.

I like to book the cheapest, non-bundle deal and then complain later about the luggage and fare limitations. However, in this case, as we planned to do a bit of shopping in Vietnam, we decided to pro-actively buy 15kgs of checked luggage for both the flight to Da Nang and the return flight back to Singapore. This ended up costing S$21 per flight, but there are a lot of other luggage options if you need to buy more.

As we opted for the non-bundle fare, we would have had to pay extra if we wanted to pre-select our seats. There were three pre-paid seat options for our flight: S$6.00 for a “standard” seat; S$13.00 for an “upfront” seat; or S$30 for an “extra legroom” seat. These were per seat, per flight prices, so if you are travelling with a large group, these fees can really add up.

I hate paying to select my seat, so I didn’t do it on this flight. When I went to check-in online, we were automatically assigned two aisle seats in separate rows. Once on board, I was able to swap my aisle seat with the woman sitting next to Amy.

The booking process is a bit long as Jetstar tries to sell you a million different “extras”. One of those options is to join Club Jetstar.

Club Jetstar is offered for a one-time joining fee of S$50 and then an annual fee of S$49.36 per year, waived for the first year (this “waiver” is a joke since the joining fee is almost for the exact same amount). My guess is that the benefits of this program are minimal and would probably just result in a lot of spam emails from Jetstar. I decided to pass.

The booking process also includes the option to pre-pay for hot meals. Judging by the number of people who received pre-paid meals on our flight, this must provide a big revenue boost for Jetstar (these pre-paid meals were all served first).

There are also a few snack options that can be purchased along with a $10 in-flight voucher which can be had for S$9.50.

I sat in seat 19E, the middle seat on the right-hand side of the plane. The Airbus A320 has 30 rows of economy in a 3-3 configuration.

The seats on the flight were leather and aside from the “extra legroom” option, were all the same. There are no business class seats or premium seats.

Google Flights lists the legroom at 29”, or below average, and I found them to be cramped, especially when the person in front of me reclined his seat. The seats may not be as bad as Spirit – at 28” – but they’re pretty close. If you are especially tall and expect the plane to be full, or if you are booked on a longer flight (Jetstar flies plenty of longer routes using the A320), you may want to splurge on the “extra legroom” option.

On a bit of a side note, I am actually a fan – at least in theory – of pre-reclined seats. Anything that prevents the person in front of you from having control over your own comfort.  I just wish the airlines that did offer these – Spirit and Frontier – also offered decent legroom. Jetstar does not offer pre-reclined seats, but I found myself kind of wishing that they did during this flight – especially when the person in front of me fully reclined his seat all flight.

One of my biggest complaints about the seats was how thin they were. I could feel the knees of the person behind me digging into my lower back every time he changed position or bumped into my seat, which seemed to happen a lot. This was despite the fact that I didn’t recline my seat during the flight. If no one is behind you, the seats are just fine, but if you have someone tall behind you, expect to be jostled quite a bit.

The inflight Jetstar menu, like the options at booking, is extensive, but if you didn’t pre-order don’t expect all the options to be available when the flight attendants get to your seat. For example, we tried to order a sleeve of Pringles and a meal option, but they had run out of both by the time the flight attendants made it to our row. There was plenty of alcohol available however, and we ordered two beers for S$8.00 each.

The A320 has individual air vents which helped to keep the plane cool. There were also individual reading lights available above the seats. 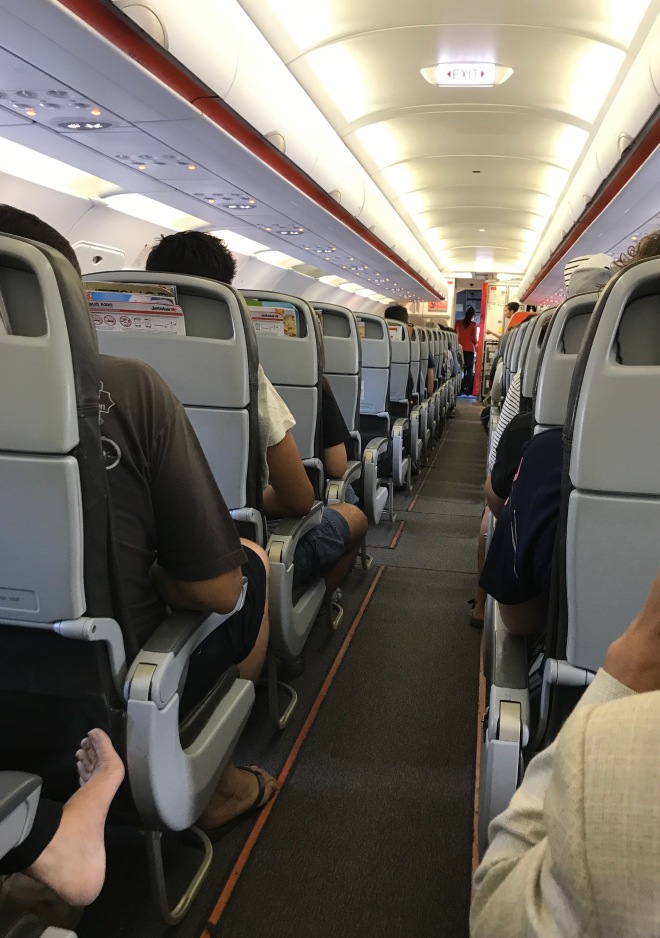 The actual flight to Da Nang was uneventful. We taxied in Singapore for about 20 minutes before a short-take off roll and a smooth ride out. The seat belt sign was turned off after about 10 minutes. On both of our flights, the pilots made no welcome announcements, and aside from asking the flight attendants to take their seats during a bit of turbulence on the way to Da Nang, there were no other pilot announcements.

I passed the time on the flight reading and listening to pre-downloaded podcasts. There was no Wi-Fi or in-seat power on the flight.

Unlike most US discount airlines, I’ve never had a problem with Jetstar’s on-time performance. Similarly, our flight touched down in Da Nang, Vietnam right on time. The total trip was just shy of 2 hours and 30 minutes. We deplaned directly onto the runway where a shuttle bus took us to immigration.

Jetstar Asia is a low-cost carrier with great access to Southeast Asia. Although the seats aren’t the most comfortable, the overall flight experience is generally pleasant. For short to mid-range flights, I wouldn’t hesitate to fly them again.

This was our flight path, courtesy of flightaware.